Described below is a more in-depth history of the Ford Falcon nameplate.  To see more detailed technical information check out our Features and Specifications Page.

The Falcon design came out of the need for domestic (US) automakers to produce a compact car to compete with international companies such as Toyota and Volkswagen. Towards the end of the 1950s the trends were leading a way from large full size cars and more towards compacts, “sporty” coupes and convertibles.

It should be noted that at the time the Ford Falcon was considered to be a small car in America while in other international markets it was looked at as a mid-sized automobile. 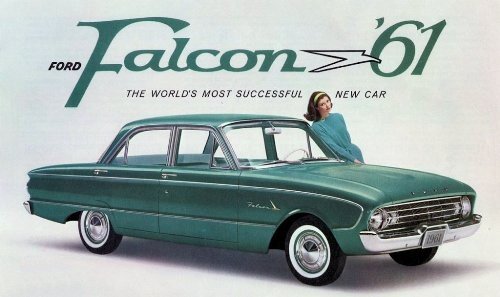 While Chevrolet introduced the Nova and GM the Dodge Dart; the Ford Falcon was the most popular of the three domestic models, selling over 1.5 million troughout the first two model years. Several now extinct domestic car companies also entered the market with their smaller versions including Edsel, Nash, Hudson, DeSoto and Packard. The success of the American Falcon led to offshoots being produced for South America, Mexico and Australia, with the Australian version still being produced today. 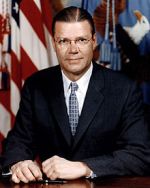 The Falcon is considered to be the “brain child” of former Ford Motor Company executive Robert S. McNamara. McNamara was Ford’s general manager and commissioned the team to create the Falcon while staying directly involved to ensure costs and car weight were low. McNamara was promoted to Group VP of Cars and Trucks and then served briefly as Ford’s president.

Robert S. McNamara is an important name to US history, as shortly after the introduction of the Ford Falcon McNamara would leave Ford to work as the eighth United States Secretary of Defense. McNamara served under John F Kennedy (JFK) as well as Lyndon B Johnson and had a major role in pushing the US involvement in the Vietnam War.

McNamara was a US Army Air Forces veteran who used his expertise in logistics gained during WWI, to apply it to both Ford’s production process and later while in public office, to build several governmental agencies that are still in place today.

The Ford Falcon was manufactured from 1960 – 1970 spanning three generations and concluded with a 1970 ½ model which was more akin to the low end Ford Fairline. While the Falcon did well in its first two model years and paved the way for an important compact car market in American; it was eventually eclipsed by the Ford Mustang and related vehicles leading way to classic American muscle cars.

Let us know what you think in the comments section below…